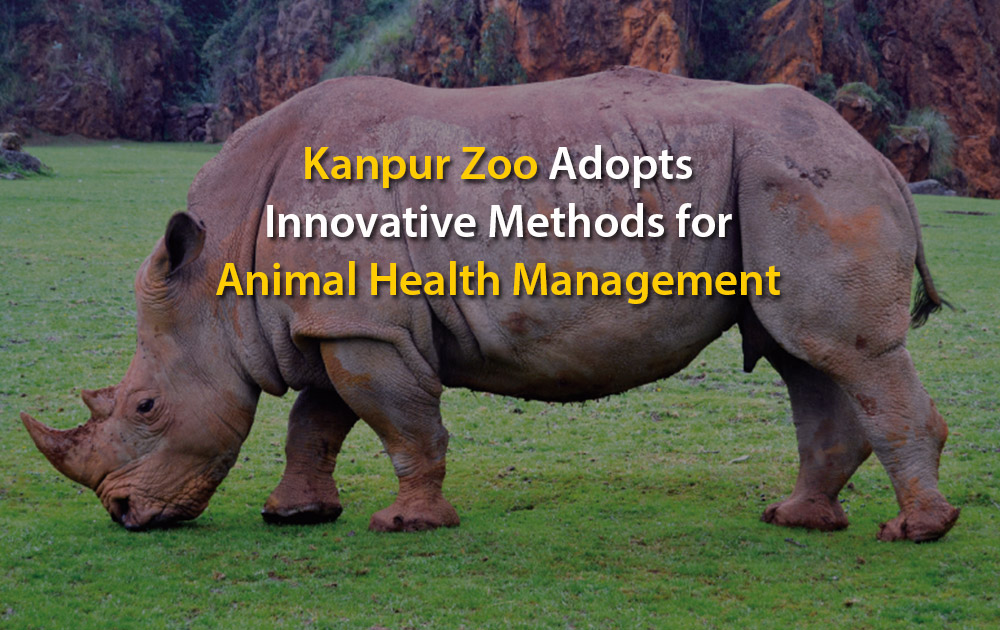 The mammoth reptile was kept in an iron-barred cage of the hospital. The appearance of the python showed that it had recently ingested medium-sized animal. On examination, all rows of the teeth and the tongue were damaged.

On the 35th day, he began exhibiting normal activities. The python was released after three months. The case had hit the headlines three years ago.

Recently, a barking deer writhed in pain for days after its lower jaw dropped perilously was shifted to the hospital. Its cosmetic surgery was carried out so that his jaws work in perfect unison to chew food.

Buoyed by a slew of such accomplishments, vets are embarking upon innovative initiatives to protect the zoo’s wildlife.

A rhino developed pus in one of its legs. Its dressing was a huge task. But because of pain, the bulky animal squirmed. A new surgical device was designed for the remote wound cleaning. The technique clicked and provided instant relief of pain for megaherbivores. The technique got international acclamation. It was displayed on the website by Rhino Resource Centre sponsored by the WWF.

Usually, the mating among rhinoceros is violent and female is chased by the male before mounting with frequent infighting and biting. The act may last for hours before coitus which is also a long process. Sometimes takes more than an hour.

A unique method was devised by the zoo veterinarians by using a half horsepower water lifting pump, thick-walled PVC/Rubber tube. A tube with a nozzle and a large container of around fifty-litre capacities. Tube with nozzle was connected at the outlet end of the water lifting pump and on other ends i.e. inlet end, a thick-walled PVC/Rubber tube was connected. The other end of inlet tube was submerged into a large container containing 2 percent potassium permanganate and 4 percent povidone-iodine solution. The rhino was taken into his night house and the wounds were washed with the solution daily for two days. Then alternatively for three more occasions.

The zoo is presently housing 12 leopards; many of them are zoo-born. Among them, the leopard named Saddam, born to dam Mona and Wild Sire is very ferocious and have the well-built body. The animal was quite healthy up to the age of nine. But then got its tail tip injured which slowly developed into gangrene. Sastry (1983) defined gangrene as ‘necrosis of the tissue with putrefaction by saprophytic bacteria’.

The leopard was treated with antibiotics and other prescribed methods but the recurrence of the disease could not be prevented due to leopard’s tendency to keep its tail on the surface. Owing to continuous rubbing of the tail and wild animal managerial constraints. It was not possible to dress the tail daily. And the only possible successful treatment advocated for the tail gangrene is said to be the amputation from one uninfected coccygeal vertebrae above the gangrene.

According to doctors, the possible reasons behind the successful treatment of Saddam was a prevention of infection by confinement of the animal by making a coating of turmeric and the ayurvedic antimicrobial agent. Further prevented residual infection and helped in the healing of the tissue.

After a thorough and efficient monitoring, the leopard was again released in the enclosure after a long period. And has not shown any sign of infection in the tail in last more than one year.

Now, a new operation theatre with modern machines is being established in the zoo in order to facilitate the more complicated surgeries.

A trio of vets – Dr R.K. Singh, Dr U.C. Srivastava and Dr Mohd. Nasir has been working not only to save the wild animals but also helped to develop the zoo as one of the best-managed zoos of the country with respect to animal health management.

The trio has applied innovative ideas of treatment. Efforts were also made by vets in attracting corporate word to not only adopt the animals but were also encouraged to make adoptions in wild animal health field. And leading pathology of Kanpur began to analyse the pathological samples free of cost.

New surgical technics were developed to surgically treat the animals. These vets got their several papers published in several international journals. Kanpur zoo became the first zoo in India to receive ISO 14001:2004 to “conserve, breed and provide the alternate home for the fauna of national importance”.

Apart from above, another feather has been put in their caps by coining a new English word ‘WILDOMESTIC’ for the wild animals in captivity. This has been widely recognized and accepted by wild lifers and print and electronic media. It has been recommended by all for inclusion in several dictionaries such as Oxford and chambers few to name.