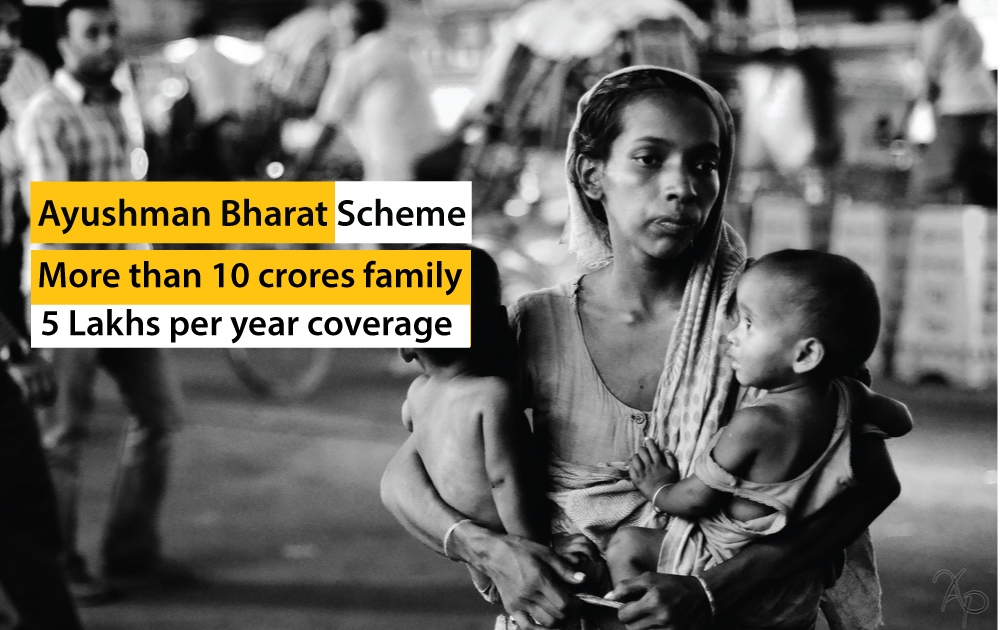 Eligibility and benefits of the scheme:
1. The benefit of cover Rs. 5 lakh per family per year. More than 10 crore families belonging to poor and vulnerable population based on SECC database will be the target beneficiaries of the scheme.
2. The cover will take care of almost all secondary care and most tertiary care procedures.
3. Under this project, the entitlement will be decided on the basis of deprivation criteria in the SECC database. The different categories in rural area include families having only one room with Kucha walls and kucharoof; families having no adult member between age 16 to 59; female-headed households with no adult male member between age 16 to 59; disabled member and no able-bodied adult member in the family; SC/ST households; and landless households deriving major part of their income from manual casual labour, as mentioned on the official website of Ayushman Bharat scheme-abnhpm.gov.in.
4. Automatically included families in rural areas having any one of the following: households without shelter, destitute, living on alms, manual scavenger families, primitive tribal groups, legally released bonded labor, will also come under this scheme. For urban areas, 11 defined occupational categories will be entitled under the scheme.
5. There will be no restriction on family size, age, and gender under ‘Ayushman Bharat’ scheme to ensure that nobody is left out (especially women, children and elderly).
6. Under this scheme, the treatment in case of hospitalization will be free of cost for the family.
7. All pre-existing conditions will be covered from day one of the policy. The benefits cover will include pre and post hospitalization.
8. The beneficiary will be able to go to public or empaneled private hospitals across the country and get free treatment.
9. The beneficiary will only need to carry any prescribed ID to receive treatment at the hospital.
10. According to Dr. Dharminder Nagar, MD, Paras Healthcare, “Government is acting strongly and actively in making ‘Ayushman Bharat’ a reality.  PM’s announcement of rolling the policy under ‘Pradhan Mantri Jan Arogya’ through a technologically driven transparent platform speaks of government’s vision. We hope that Ayushman Bharat paves way for a concerted effort on improving country’s healthcare facilities.”