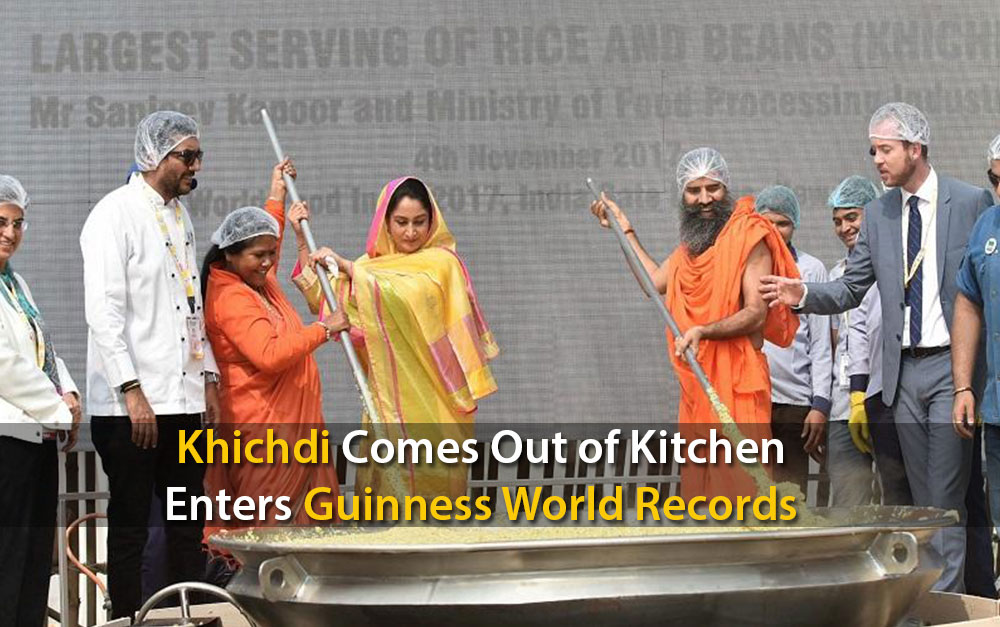 During ancient times, ‘Khichdi’ remained a favourite food in ashrams and even now it is being served as ‘prasad’ at religious places.

“Khichdi is healthy and superfood. It is good for those depending on food supplements. It is rich in all nutrition,” Yoga Guru Baba Ramdev said. It is a good step towards promoting healthy superfood not only in the domestic but also in the international market says the Yoga Guru who used to cook and eat khichdi in Gurukul.

Food Processing Minister- Harsimrat Kaur Badal said, “It is a wholesome food as it contains most of the nutrients. It also symbolizes the country’s unity in diversity. ”The dish was prepared using multigrains like rice, pulses, coarse cereals and vegetables. The night-long preparation was supervised by chef Sanjeev Kapoor. It was distributed among orphans by the Akshaya Patra Foundation and Gurudwara to about 60,000 people.

The Moroccan traveller, Ibn Battuta mentions khichdi as a dish in India composed of rice and beans. Records mention the dish is described in the writings of Afanasy Nikitin,a Russian adventurer who travelled to the South Asia in the 15th century.

Khichdi was very popular with the Mughals, especially Jahangir. Aini- Akbari, a 16th-century document, mentions the recipe for khichdi, which has several variations.

There is a story featuring Akbar, Birbal and khichdi titled as “birbal ki khichdi kab pakegi” (as how long will it take to cook the Khichdi). This a reference to a folk tale where Birbal in a battle of wits with King Akbar, was challenged to cook khichdi in a pot which was placed 20 metres above the flame, so as to illustrate the amount of time it would take for someone to “complete a task”. The story is still is being quoted as an idiom.