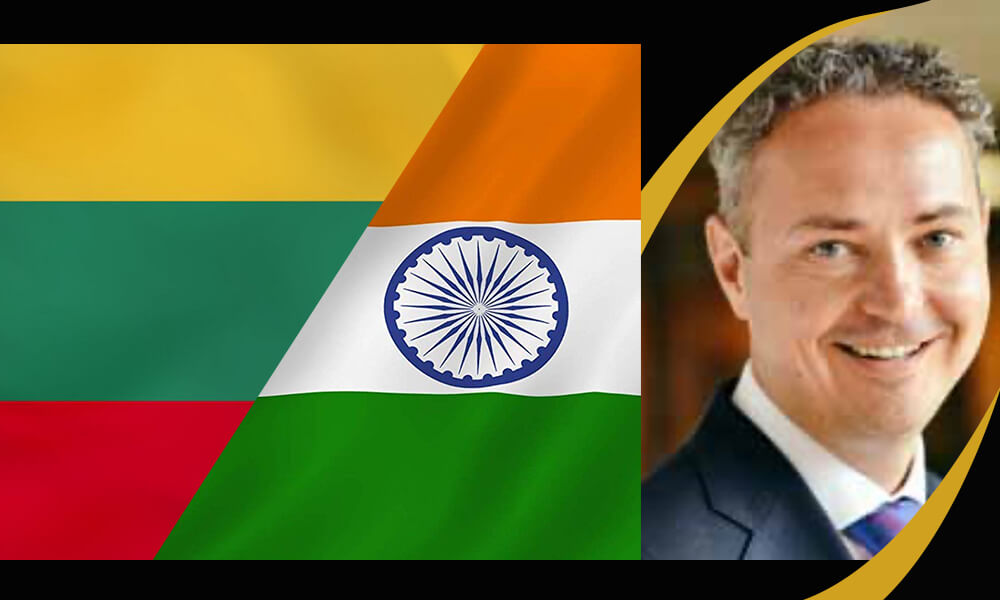 H.E. Julius Pranevičius, currently the Ambassador of Lithuania to India, has also served as Consul General at the Consulate of Lithuania in New York; Ministry of Foreign Affairs in Lithuania in various capacities including Director & Deputy Director of EU Council Presidency Department, European Union Department Head/ Counsellor/ First secretary of Institutional Affairs Division, Third Secretary/Attaché of Law Approximation Division with European Integration Department, Second Secretary with Permanent Representation of Lithuania to the European Union and many more. Sachin Gaur interviews him on his viewpoint on Lithuania-India cooperation and emerging partnership between the two nations in the times to come.

Q. Tell us about your stay so far in India? What are the obvious synergies you see between the two regions?

It is my second year in India and the potential I see for Lithuania-India cooperation amazes me. I observe high interest of Indian business community in establishing economic ties with Lithuania and I view this as a mutually beneficial venture for both the countries. We see India as an emerging economic, scientific and technological superpower. It is expected to play a major role in the global economy in the 21st century. For Lithuania – as a small, dynamic and open economy – India represents a huge potential and plenty of new opportunities which are not yet fully discovered.

Though it might seem that our countries are so different in size of land and population, climate and culture, there are more synergies than one might think. The kinship of Lithuanian and Sanskrit languages, the similarity of Pre-Christian pagan culture to Vedic Indian culture, popularity and application of Gandhian ideas on Lithuania’s path to independence and many more historic and cultural connections bind Lithuania and India across centuries.

Contemporary relations between Lithuania and India have also been very cordial. Both India and Lithuania are active in information technologies, financial, business consulting services and pharmaceutical sectors, we value education a lot and people are the most important natural resource for us.

Q. Lithuania has been at the forefront of biotech research. Tell us the background of this success story. What other regions can learn from it? Any lessons for India?

The history of the life sciences sector goes back to 1975 when the Institute of Applied Enzymology was established. The Institute quickly became a leader in the field of classical fermentation technology research. The name of the institute changed several times and in 1983 the focus of the institute’s activities shifted to development and practical application of gene engineering methods. After Lithuania regaining its independence, the institute was renamed as Institute
of Biotechnology in 1992. Due to its rich scientific heritage, Lithuania’s biotechnology industry is outpacing developments in many larger central and eastern European countries.

Increasing number of companies are the spin-off from the well-established local universities. These companies became successful in the area of their activities, thereby catching the attention of several global leaders in the area of biotechnology. As a result, successful Lithuanian biotechnology companies were acquired by foreign leaders of the market, such as Thermo Fisher Scientific, Moog, and Sicor Biotech/Teva Group.

Thermo Fisher Scientific came to Lithuania in 2010, when the company acquired a leading Lithuanian biotech company Fermentas International Inc. Fermentas had approximately 500 employees and offered a broad range of high-quality molecular and cellular biology research tools, including reagents, enzymes and kits. Thermo Fisher Scientific is one of the several large western companies, which have recently entered the Lithuanian market through acquisitions.

After this acquisition, Thermo Fisher Scientific continued to expand its investments in Lithuania. In September 2012, it opened a new molecular biology research centre of excellence in Vilnius, Lithuania. The new 10,000-square-meter centre supplies a wide range of life science applications, providing molecular, protein and cellular biology products. It aims to strengthen R&D and manufacturing presence in Vilnius which serves to grow biotechnology community in eastern Europe.

In 2009, Moog Medical Devices acquired Lithuanian company Viltechmeda, which manufactures, sells, and repairs medical equipments, devices for infusion and syringe pumps. The company announced investing another $5.3 million in 2010 to establish a service centre and expand its research and technology brand.

Israeli company TEVA Pharmaceutical Industries, which is the second largest generic pharmaceutical company in the world, acquired Lithuanian biotechnological pharmacy company Sicor Biotech in 2006. Now $30 million of foreign direct investments is being made into the development of a new multifunctional Sicor Biotech/ Teva plant, TEVA’s biosimilar cancer drug tbo-filgastrim, which won FDA approval is based on a technology developed in Lithuania.

Also, Lithuania has a pool of well- educated talents in biotechnology, medicine and other high-tech industries. Our start-up ecosystem grew 5 times during the last 5 years, and we have strong start-ups in life sciences sphere, who are attracting attention from global corporations with their innovative and disruptive solutions.

The mix of our early dedication to life sciences, talented people, good infrastructure, collaboration between business and academia and well- developed life sciences ecosystem made Lithuania a great place to thrive in life sciences sector.

In general, we are a one-stop-shop for life sciences as a region, even though each country developed its own scope of innovations and technologies. When it comes to genetics & heredity, personalized medicine and e-health, Estonia is on top of the ladder. Latvia has a very advanced and well- developed pharmaceutical industry, meanwhile Lithuania offers a wide range of innovative biotechnology and medical devices. Hence, Life Sciences Baltics forum has intention to represent all three countries and offers a chance to meet the leading regions’ stakeholders in one place.

But Life Sciences Baltics is not only about Lithuania or Baltics – it is the second biggest conference in the region, so we can talk about all northern Europe at least. As the event proudly introduces itself – Life Sciences Baltis is the only Baltics’ life sciences forum where things are put into motion. Gathering global biotechnology, pharmaceutical and medical devices leaders, the forum provides a unique opportunity to turn ideas into projects, goals into actions, new connections into contracts or small talks into hypotheses for the future researches.

Q. How can Indian companies benefit from Lithuanian partnership and vice versa? What is the opportunity?

The rapidly growing life sciences sector in Lithuania is driven by two key trends – a well-established R&D base and favourable environment for business and investments. Life sciences sector companies offer cutting-edge technologies for their partners to revolutionize this sector and find the most innovative solutions. Therefore, expanding Lithuanian businesses are very open to new partnerships. Even 90% of life sciences products and services are exported across European countries, USA, Russia, China, Japan, etc. Thus, companies of Indian origin shall be interested in a robust and growing life science industry in Lithuania. It may be a “gateway” to enter the European market and opportunity to expand business into a market of over 500 million inhabitants.

Q. There is a trivia about Indian languages like Sanskrit to be recognizable by Lithuanian people? Tell us more about it?

Lithuanian is considered the oldest surviving sister of Sanskrit in Europe. Many of the words we use in our everyday language are still recognizable to a modern Hindi speaker. For example, we say dievas (dev) when we appeal to God, labas (lābh) when we greet each other wishing wealth and prosperity, and sapnas (sapnā) when we share our dreams and visions. Common words are rooted in practically all areas of everyday life: human body parts (nakh – nagas, aśru – ašara), nature elements (agni – ugnis, vāyu – vėjas), family (devar – dieveris, sasur – šešuras), household, and religion. Most importantly, our connection with Sanskrit serves as a defining element of our national identity. To promote this awareness, our Embassy, in collaboration with the Lithuanian Language Institute, has produced a small dictionary containing 108 words which are identical in Sanskrit and Lithuanian. Scholars say many more such words could be added in the future editions.