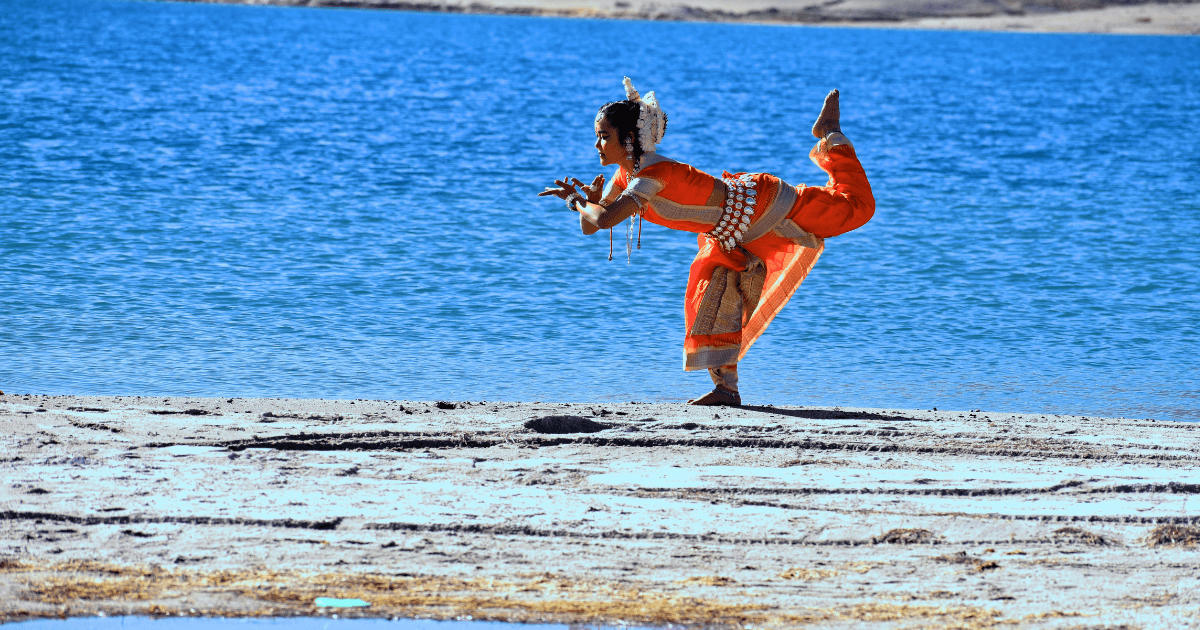 The soulful path of Yoga transversed by a classical dancer

Home » The soulful path of Yoga transversed by a classical dancer

It is said that the first yogi or ‘ADIYOGI’ was Shiva, and he is also the king of dance Nataraja. Maybe that’s why the Classical dances of India have their roots in Yoga, and their goal is union with the supreme consciousness through bodily transcendence. Thankfully, most of the reputed performing arts institutes and gurukuls have incorporated yoga in their curriculum.

I was drawn to yoga right from childhood as both my parents were classical dancers. It is hard for me to pinpoint when I started Yoga as it has always been there for as long as I can remember. But my formal introduction to Yoga (as it was a mandatory subject) was when I joined National school of Kathak, fondly known as Kathak Kendra, New Delhi under the tutelage of Nisha Mahajan.

So my first formal yoga session was as a Kathak student. We were told to sit in “Nispanda bhava” which is sitting with legs stretched out, taking support of a wall, hands resting on the thighs, and just passively listening to any sound. Gradually I started to feel that my senses were getting heightened.

Interestingly, though I was sitting in a passive state I was actively aware of the minutest movement, faintest of the sound, smells, and even touch. So, when I came out of it I was completely rejuvenated, fresh, and ready to go.

“In today’s time when most of us are getting consumed physically, mentally and emotionally, Yoga provides the much needed servicing of our body and more importantly conditioning of our mind.”

Nispanda bhava, as I got to know later is a conditioning method introduced by Shri Yogendra ji of “The Yoga Institute”. In which all the basic five senses( Jyanendriyas/ ज्ञानेंद्रिया) gets highly activated and you are conditioned to start your YOGA practices.

Recently, when I was doing this Advance teachers training course, from the yoga institute, I could finally understand its relevance with the first sutra (code) from the book “YOGSUTRA” written by sage Patanjali. The first sutra “ATHA YOGA ANUSHASANAM” (अथ योग अनुशासनम) means “Now begins the instruction on the practice of Yoga.” One has to be absolutely present in the moment (i.e. NOW) to initiate and understand the lessons of Yoga. However, Nispanda bhava can also be practiced to relax when you are tired. In today’s time when most of us are getting consumed physically, mentally, and emotionally, Yoga provides the much-needed servicing of our body and more importantly conditioning of our mind.

The similarities between a classical dance regime and yoga session

The final talk during my Advance teachers training course (ATTC) in yoga was on the similarities of dance and yoga. It is hard for me to put it in a nutshell here. But let me try. Before going further let me tell you that Patanjali’s Yoga has eight limbs or stages called ASHTANGA Yoga. They are further divided into two groups – Bahiranga (external or physical state ) and Antaranga ( internal or emotional/ intellectual state).

The very foundation of Indian classical dance begins by following a strict timetable or routine, which includes regular practice or ‘RIYAAZ’. The ‘Riyaaz’ is only possible when you follow a code of conduct towards yourself first (health and hygiene), secondly your conduct towards others (behaviour, attitude), and then of course respecting Space and valuing the Time. There is a similarity to the first two stages of Ashtanga yoga  (the eight limbs of yoga) i.e. YAMAS, the ethical and moral values, and NIYAMAS which is virtuous habits and observances. The dance form which I am currently pursuing is Odissi, which incorporates postures and movements that find their base in KARANAS.

The Karanas are co-ordinated movements or actions of the body. 108 such karanas or units of dance are named and defined in the Natya Shastra, the most ancient text on the performing arts composed by Sage Bharata Muni. The unit of dance is defined by the stringing of postures (angahars), movements, hand (Hastak / हस्तक or Mudras/ मुद्रा) and feet positions( pada bheda / पाद-भेद) etc. This is somewhat similar to Vinyasa yoga which is a flowing sequence of specific asanas co-ordinated with the movement of the breath. So here one can correlate dance movements and ASANA, which is the third limb of Ashtanga Yoga.

Indian classical dance movements are complex and tough. A very highly efficient neuromuscular co-ordination is required to carry out complex choreographies, not to forget that an average solo dance recital might last from 30 minutes to an hour duration. It is a fact that to last 30 minutes on stage a dancer should at least practice 2-3 hours daily. And to sustain that long on stage you need immense stamina and consistent flow of energy. This can be achieved by practicing different breathing techniques which comes under Pranayama or the fourth stage. Regular practice of Pranayama helps a dancer to maintain a steady flow of energy throughout the performance.

The above four stages described comes under Bahiranga Yoga, which enable or help the dancer to master the technical aspects of the art form i.e. Nrittya or pure dance. Then comes the interesting transitory phase, PRATYAHARA or the ego detachment. The word Pratyahara means “to withdraw”. In Ashtanga Yoga, it is known as the bridge between the Bahiranga yoga and the Antaranga yoga.

“While there are many philosophical and practical connections between yoga and dance, the principle of unifying opposites is essential to both systems.”

This is a stage when a dancer starts to learn how to separate or withdraw from self and immerse in the dance. The internalizing of the teachings/ techniques one has received till date acts as the route to achieve higher understanding and delving into deeper levels of dance. This is also the time when the seed of individual’s spiritual journey as a dancer is sowed.

When a dancer is fully focussed (DHARNA, the sixth limb of Ashtanga yoga) and absolutely engrossed to a point where the performance becomes like an act of Meditation (DHYANA) it may lead to a yogic experience. This is when one sees the dance and not the dancer and can experience the RASAS (emotions). It is said that performing and watching performances (rasikas) with the objective of experiencing such detached states of mind is spiritually beneficial and would account for the centuries of close association between dance and religion (temple rituals) in the Indian tradition.

While there are many philosophical and practical connections between yoga and dance, the principle of unifying opposites is essential to both systems. Practitioners of HATHA YOGA are often told that the word “hatha” represents the figurative joining of the sun (ha) and the moon (tha), respectively masculine and feminine energies. On a practical level, this often translates as the balance of differing qualities within a pose: strength and flexibility, inner relaxation and focus. Within Indian classical dance forms, this balance of the masculine and feminine is understood as the balance of TANDAVA and LASYA

Freedom from all biases which a human mind can possibly create or has created. The moment the mind starts to let go of “I” or EGO, it starts assimilating or understanding the magnanimity of the creation, the whole cosmos. It takes away all possible NEGATIVITY if practiced with full integrity and honesty. To keep a check on self, Swadhyaya (स्वाध्याय) / self-reflection is a part of the practice.

“Any true system of yoga is designed to refine your consciousness and take you from the lower to the higher levels, where only the methods differ.”

The various yoga forms and the preferred style

Formally, I was introduced to Ashtanga yoga, so I mainly follow that style. But whenever I have to do ASANAS, I prefer the Vinyasa form in which the sequencing of the asanas are like dance movements linked to the next through breath.

It is hard to choose a preferred style of yoga for an individual. As for me there has been only one preferred style that is traditional ASHTANGA yoga. Any true system of yoga is designed to refine your consciousness and take you from the lower to the higher levels, where only the methods differ. For example, HATHA Yoga acknowledged that the body was actually an amazing tool for shifting our consciousness so more emphasis was given to Asanas, Kriyas, and Pranayama. Then there is Kundalini Yoga which relates to opening chakras or life force energy.

Health measures taken for practicing Yoga in some people

Certain care is definitely needed to be taken for people who have heart condition, blood pressure issues, recent body injuries accidents etc. There are certain do’s and dont’s augmented for pregnant, mensturating women and people with special needs.

Importance of flexibility in yoga

Advise for the yoga beginner’s

The second sutra, chapter one of Patanjali’s YOGSUTRA says “ yogashchitta vritti nirodh” (योगश्चित्तवृत्तिनरोध:) which means “yoga is controlling the fluctuation of mind”. As a yoga practitioner cum dancer I often connect the above sutra to Natyashastra’s “yatho hastha tatho dristi’’ which translates to the meaning that where the hand goes the eyes follow, “yatho dristhi tatho manah’’, where the eyes goes the mind follows, ”Yatho manah tatho bhaava’’, where the mind goes emotions follows, ”yatho bhaava tatho RASA’’, where the emotions are in accordance the essence arises. Yoga is an experiential science. Each individual might take the same route but the journey will be different. However no matter what the destination is one.

My biggest inspiration is Life, embodied with the mysteries of our body and mind . Yoga is also said to be union of mind, body and soul. (“Yuj samadhau”) I conclude with this quote- “The universe is not outside of you. Look inside yourself; everything that you want, you already are.”– Rumi

“Molina Singh is an accomplished Indian classical dancer, actor, producer and yoga teacher. She has received many accolades and appreciation for her work. She was bestowed with ‘YUVA RATNA’ for her achievements in dance. Apart from being a classical dancer she is a certified yoga practitioner. Her maiden theatre production is NAHAKGEE NUNGSIRABI (yours lovingly) – LOCAL FOREIGNER which has received huge appreciation in theatre arena.”