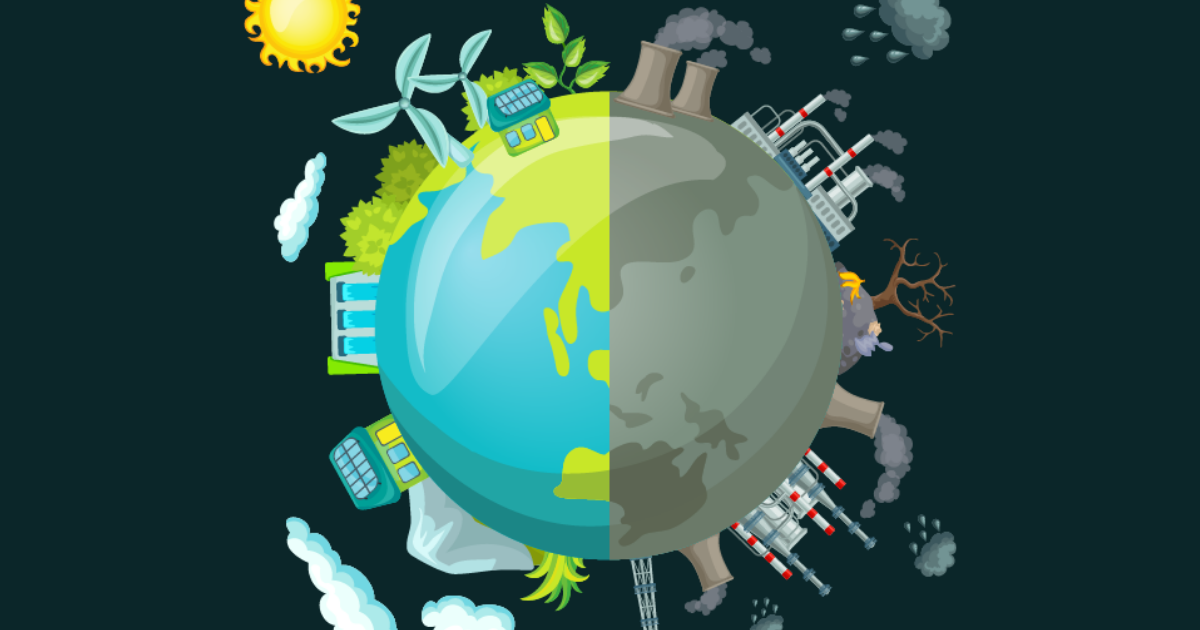 Pollution receives a fraction of the interest from the global community. The cause of pollution is related diseases that often makes it difficult to draw a straight line between cause and effect.

To understand this and an effort to sensitize the concern, InnovatioCuris Foundation of Healthcare & Excellence (ICFHE) organised it’s tenth virtual IC InnovatorCLUB meeting on Nov 11, 2021 on the theme “Pollution and Diseases”.

During every winter season we hear more and more cases of increased pollution and its related diseases. According to stats, about 18% of the deaths are caused due to pollution in India.

Delhi is the most polluted city followed by Kolkata, Mumbai and Chennai. But the real question and concern is, how much political will is there to tackle the pollution?

Addressing this Dr. Singh said, “should we really have to wait for the media to highlight the issue to act upon, or for supreme court PILs to be raised to address the issue? What are some of the necessary steps to be taken in .” With this food for thought in mind, the evening proceeded with it’s session further.

The issue of improper disposal without proper segregation of solid waste was highlighted by Dr.Sunil Kumar who further elaborated about the need for integrated solid waste management & emphasized on removal of soil pollution. Solid waste being the most visible form of pollution, is disposed of in billions of tonnes every year, hence making the condition even more severe.

Since there is a disconnect among the local municipalities, all the garbage is collected and delivered to the final dump sites incorrectly due to lack of resources or any adequate infrastructure for the management, this has resulted into major health consequences causing various negative externalities to environments. There are a lot of impacts of solid waste on the health of  preschool children, oil rig pickers, facilities manufacturing workers among others residing nearby the dump sites. Hazardous Waste exposure can have a negative impact on human health, particularly children who are being exposed to these contaminants.

He also mentioned concerns caused by chemical pollution/poisoning from the release of unmonitored chemical waste into the environment. He also suggested a treatment and disposal facility that can potentially pose a health risk to the surrounding community. The inefficient incineration of biomass pollutes the air along with that poorly managed landfills attract a variety of disease carrying insects and rodents therefore these places should ideally be situated at a safer distance from any human settlement.

An average person in our modern society breathes in and drinks hundreds and thousands of tiny particles of plastic every day.

Plastic waste, Electronic waste and leachate are the emerging concerns for the human race. Plastic pollution is a concern everywhere, not just in the oceans. The Himalayas and the Sahara are also not bereft of plastic. An average person in our modern society breathes in and drinks hundreds and thousands of tiny particles of plastic every day. Plastics pollute the environment in various forms, not just as litter. In the process of making it, sometimes the chemicals used to make it seep out, thereby releasing toxins into the environment. These chemicals are now in the blood of nearly every person on Earth, even the unborn ones. Some are known and suspected cause of a broad range of health problems due to plastics are birth defects and brain damage.

Talking and sharing his experience on river plastic pollution we had Yash Dadhwadia. He shared that about 12 million metric ton plastic reaches the oceans every year. Soon, if not already, the weight of all the plastic in the world’s oceans will weigh more than all of the oceans’ fish. This affects marine life; much of this plastic is consumed by the fish themselves. Marine animals like turtles and others, especially seabirds, mistake plastic for food. Although it is not digestible to them, it gives them the sensation of being full so the animal then starves to death.

This menace caused by microplastics requires attention from the authorities and needs new ways to address our environmental challenges. It is reliant on our ability to foster innovation to find ways of driving systemic change. To support such innovation and progress towards circularity, Huhtamaki partners with RiverRecycle and VTT to develop technology to tackle floating river waste. New technology river waste collectors are now operational on the Mithi River in Mumbai, India. This will need cooperation across the value chain with key stakeholders to address global sustainability challenges, for example such as in this case marine plastics.

Such initiatives could be a boon to manage the waste on the shores of the most polluted rivers, collecting and recycling plastic waste and floating debris and saving the environment from being polluted.

Moving ahead we had expert opinion and suggestions from Dr. Debleena Bhattacharya on water pollution. As we all know, we only have 3% fresh water that can be used for drinking, irrigation and bathing and other necessary daily use. Dr. Bhattacharya shared that there are four major causes for the pollution, namely, Unethical farming practices, Illegal disposal of industrial waste water, Population growth posing rise in fresh water demand and Microplastics.

As Dr. Debleena shared, according to the recent data, 1.1 billion people worldwide lack the access to clean drinking water and a total of 2.7 billion people find water scarcity and hence the inadequate sanitation; as well as 2.4 billion people around the world are exposed to diseases such as cholera and typhoid. So, in the recent study, we have seen that 2 million people, mostly children, die each year due to diarrheal diseases alone. So, this data is really something that we should be concerned about.

She also suggested that we monitor our dietary habits to avoid foods that require too much water during it’s irrigation, such as Avocados and replace it with a substitute that requires far less water to be cultivated such as raw coconut. Nowadays people are going for making this superfood into farming practices but are unaware of the fact that it requires 320 litres per avocado that is 64 times more than a simple tomato vegetation that has been grown. And invariably, by 2050, for places like California it is said that it will be having water problems because already so much water has been consumed by this illegal practice of farming.

A recent study of IIT Madras done over the Kaveri river shows there are a lot of pharmaceutical residual products, personal care products and miniscule particles of plastics are being disposed of. These discarded components still remain in the water even after treatment and then we intake them along with the water which causes the residual deposition in our body that further causes health issues in adults and also in newborns. Dr. Debleena also shared how the microplastics’ deposits are creating problems in the food chain and how it will also remain harmful for the generations to come. Because of the biomagnification of this harmful residual in our food chain and invariably our body, it is of concern for us and for our future generations that we need to control this pollution. And take steps to curb these problems in the near future.

Next the panel saw another expert, Mr. Amit Bhatnagar who talked about how the quality of air is being affected nowadays and how entrepreneurs like him are trying to curtail the issue. He categorises the challenge into two categories, one being the challenge of awareness or psychological ignorance and other being the innovative way to tackle the problem. Air pollution kills an estimated 7 million people worldwide every year. Data from WHO shows that almost all of the global population (approx. 99%) breathe in air that exceeds the WHO approved limits containing high levels of pollutants, with low- and middle-income countries suffering from the maximum or highest exposures. WHO is supporting countries to address air pollution. From smog floating over cities to smoke inside the home, air pollution poses a major threat to the health and the climate. The combined effects of ambient (outdoor) and household air pollution cause millions of premature deaths every year, largely as a result of increased mortality from stroke, heart disease, acute respiratory infections, chronic obstructive pulmonary disease and lung cancer.

Mr. Amit shared how they have made an effort to clean the air for the masses by his innovative solution that can harness the energy of moving vehicles and clean the air while the vehicle is running on the road.

Up next we had Dr. Nitish Dogra who highlighted the six aspects of the pollution –  why, when, where, who, what and how. Very lucidly he explained how the pregnant mothers are being the most affected ones and how the birth weight is going down due to increasing pollution. He also explained the concern over the increasing pollution and its repercussions that not only affect the lungs but also heart and brain. He also touched upon where one should be taking the necessary action and when should one move out to act to cater to this problem.

Exposures to environmental pollution remains a major source of health risk throughout the world, though risks are usually higher in developing countries as compared to developed ones, where poverty, lack of investment in modern technology and weak environmental legislation contribute to high pollution levels. Associations between environmental pollution and health outcomes are, however, complex and often poorly characterized. But what is most important is that many of the risks and health effects are readily avoidable. The need of the hour is to take preventive action to reduce the emission of pollutants into the environment in the first place—and that is largely achievable with existing know-how.

With the panel of experts enlightening us about the various intricacies of the relationship between pollution and diseases, it gave us the food for thought that so many areas of pollution need to be monitored in order to curtail the ever emerging new diseases. With these consternating thoughts the session awakened us and invariably inspired us to take steps no matter how small to safeguard our environment from the wrath of harmful pollution and securing the lives of our future generations.

Do let us know if you have any interesting ideas that you would like to implement to cater to these issues or have already implemented in your neighbourhood. We will be happy to hear and share your efforts.