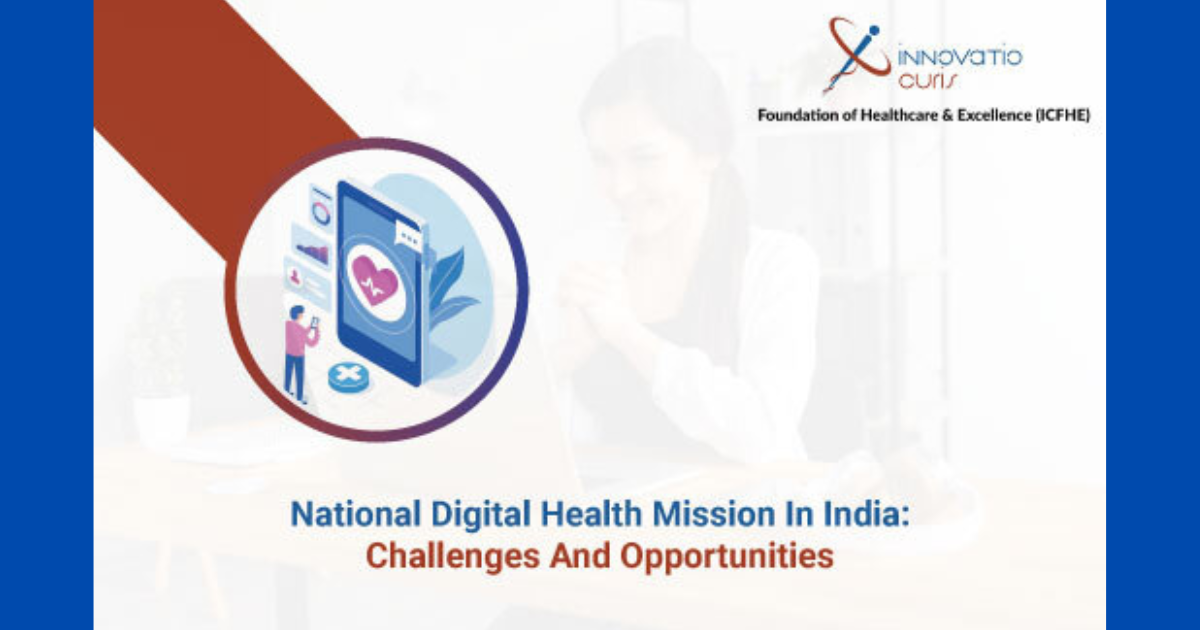 The meeting commenced with Mr. Sachin Gaur, Director Operations at InnovatioCuris Foundation of Healthcare & Excellence, introducing the IC InnovatorCLUB and the motive behind having “National Digital Health Mission in India: Challenges and Opportunities” as the theme for the edition of the meeting. He introduced all the speakers Dr. Pushkar, Dr. Amit Raj, Mr. Abhinav Singhal and moderator Mr. Partha Dey. He also made an important announcement about the conference that will be held physically on 9th and 10th of December in partnership with IIIT Delhi. The topic of the conference will be ‘National Digital Health Mission In India’. He invited Mr. Partha Dey, Founder of U4rad technologies, to moderate the session.

After thanking Mr. Sachin, Mr. Partha continued the discussion. He claimed that since it is utilised for financial transactions and other things, the National Digital Health Mission is an exact clone of UPI. It has similar healthcare experience. He claimed that we had progressed from a paper-based system to one that uses less paper. Interoperability, which will allow for paperless transactions across organisations, is on the horizon. If we take a historical look at how we first began automating or digitising a portion of an organization’s operations then it is crucial to consider the data’s interoperability within the organisations. Preceding further, we looked at digitising and automating data within a single department, and later, we looked at data exchange between departments so that two Health Information System (HIS) departmental flows or perhaps two Health Management Information System (HMIS) apps could communicate among them utilising the earlier protocols. It is now necessary to develop a UPI counterpart so that any healthcare data can be accessed as needed. There are three things with which we must be extremely cautious while adding additional data digitally. The first is data privacy and confidentiality, and the second is how we make sure the security of the data is maintained. Third stated that everyone should have a digital health ID. Mr. Partha further asked Dr. Pushkar Kumar to identify himself and continue the discussion. Dr. Pushkar is the Project Director Division, Head of PHFI and a senior public health specialist. He gave a brief introduction before sharing some slides on PHFI. In 2006, the Ministry of Family and Welfare established the Public Private Partnership (PPP) known as the Public Health Foundation of India (PHFI) to serve as the partnership’s public face. He listed the several fields in which the PHFI operates. Mr. Partha expressed gratitude to Dr. Pushkar for his observations on the work being done at PHFI.

Dr. Amit Raj was invited by Mr. Partha for his insights about his early opinions on the National Digital Health Mission before being called to the panel discussion. Dr. Amit Raj expressed his gratitude and underlined the urgent need for training and coaching in AI and cyber security.

He said that training in AI had benefited every field, including cardiology, paediatrics, and other fields. He said that the trust gap between patients and doctors has been closed as a result of the use of digital technology. It has been made possible by the digital strategy since using VR has helped patients understand their own disease. Mr. Partha concurred with Dr. Amit that it was quite helpful. Knowing what is going on among the patients often causes worry, and searching for information on Google can be difficult. When patients only have partial information, it might be difficult. Dr. Amit Raj then continued by pointing out that protecting patient data is a challenge. He claimed that he has run into issues with both public and private insurance providers about the protection of both their own and the patients’ personal information.

Insurance companies frequently reject patients because of lack of information. Physician associates have benefited from the digital approach to data protection and patient participation in diagnostics and medicines. Mr. Partha stated that although we are the custodians of the data, ultimately the patient is the owner and is responsible for determining how and when the data should be accessed.

What do you think we need to remove as a barrier for the deployment of digital programmes, Mr. Partha questioned Dr. Pushkar? Dr. Pushkar responded by stating that one of the obstacles is the lack of internet connectivity downstairs. If we move from state urban regions to rural areas, internet connectivity has not kept up. The main obstacle would be that regular data uploading is always delayed because internet access is not good. The second most important factor is acceptability. There were obstacles in the government system for many of us, including the elder generation.With time we are progressively accepting after the  epidemic and demonetization, and the government’s efforts in this direction have also been quite helpful. Additionally, because health is a state responsibility, it will take considerably longer because Tamil Nadu, Kerala, and Maharashtra are more developed than Uttar Pradesh and Bihar. Things are progressing as more people are using technology, some by requirement, some by compulsion, and others just out of habit.

Dr. Pushkar and Mr. Partha both agreed that these were the most typical obstacles. Even in major metropolitan regions, internet accessibility is not always as good as it is in rural areas. He further shared his insights and believed that it would get better with the introduction of 5G. He then noted that individuals these days are donating everything digitally, which was another point Dr. Pushkar had raised. It’s all on the site. It is now possible to share and retain records digitally.

The panel discussion extended an invitation to Mr. Abhinav Singhal, founder of O2i Tech.He expressed his gratitude and noted that at this stage, digital health has become a necessity for the entire country. From data analytics and predictive health to remote monitoring, there is a necessity. The importance of having access to healthcare nationwide is now better understood after the pandemic. The crux for the present time is the easy availability, time-bound, location-independent, cost-effective, and of better standard in terms of quality. Because of this, digital health records are essential, but they also present unique difficulties. First and foremost, the information must be accurate, available to all physicians in real time, and not all signals can be recorded. He continued by adding that although we still have a ways to go, telemedicine has a bright future and digital health will play a crucial role. An extremely useful tool for clinicians and patients alike is the perspective of infrastructure and national integration.

With the session moving forward, Mr. Sachin has made an observation that large hospitals have some type of clinical evaluation team while deploying AI in the healthcare sector in India?

Mr.Partha then asked a question to Dr. Amit Raj that other than Virtual Reality (VR) and Augmented Reality (AR) what other digital initiatives are being used by him? What does he think as a clinician can we change the practice from today?

He said that constant training and teaching especially in the nursing part and availability of doctors can be addressed as a problem statement.

Then the club meeting moved forward with a Q & A session.

Mr. Partha thanked everyone and invited Vijaya Tripathi, Head of market access and patnerships for the vote of thanks. Vijaya thanked all the speakers and participants for joining the session. This concluded the meeting.