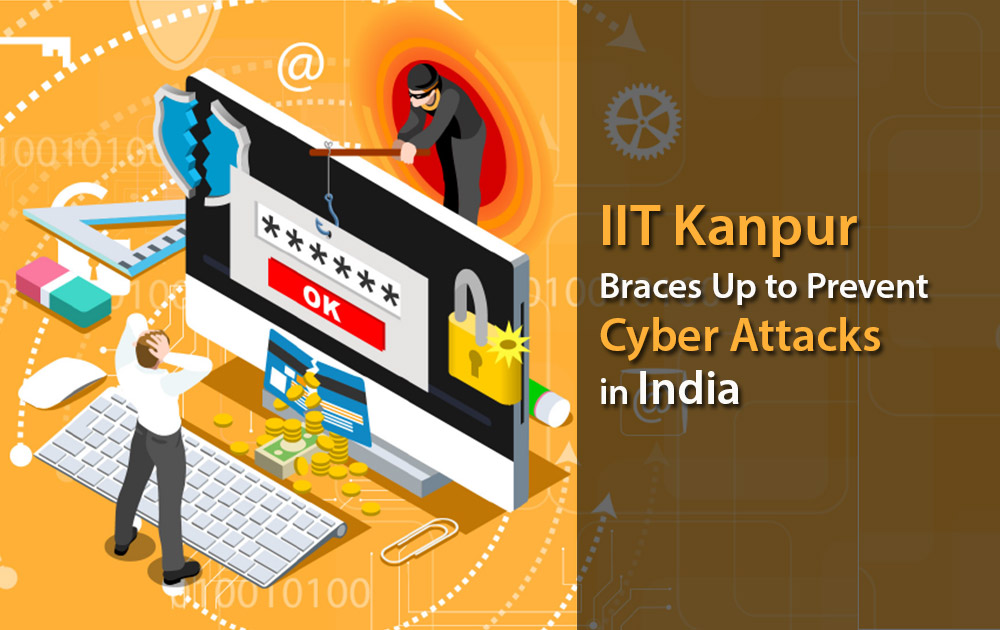 Amid lurking threats of cyber attacks on all sectors including hospitals storing medical records and its long-term dangerous implications on country’s’ economy and individual’s personal data, Indian Institute of Technology (IIT) Kanpur is all set to open a cybersecurity centre.

Department of Science & Technology, Government of India, has recently sanctioned a grant of INR 14.43 crore to IIT Kanpur in response to a proposal by the institute to set up the Interdisciplinary Center for Cyber Security and Cyber Defence of Critical Infrastructures. A period of Five years has sanctioned for the grant.  It covers expenditures for the setting up of the centre such as infrastructure, equipment etc. Cyber Security has become a pressing need the world over, with major cyber‐attacks coming to light every few months.

A large number of countries is working on strengthening their cybersecurity technology. They are working to protect their national security as infrastructure disabling cyber-attacks is a threat to national security. In India though, the work in this field is still in its nascent stages.

A consolidated effort from the cybersecurity expertise present in the country is the need of the hour and the new centre coming up at IIT‐K plans to work specifically towards this. To achieve this goal, the Interdisciplinary Center for Cyber Security and Cyber Defence of Critical Infrastructures would work closely with researchers from IIT Bombay, IIT Kharagpur, ISI Kolkata, IIT Delhi and MNIT Jaipur.

“ Working with various industry and government bodies we are convinced that cybersecurity research, training, and manpower development are national imperatives. We are very pleased that DST has decided to fund our centre and help us build the capabilities to carry out cutting-edge research and training in the field of cybersecurity, in particular with the goal to protect our critical infrastructures. We look forward to the journey in the next five years to the development of world-class capabilities here at IIT Kanpur,” said Prof. Manindra Agrawal, Principal Investigator for the upcoming centre.

The Cyber Security and Defence Center at IITK plans not only to engage faculty in cutting-edge research in the domain of cybersecurity of critical industrial systems (water treatment plants, nuclear power plants, power distribution infrastructure). But also to engage in training through courses with an emphasis on cybersecurity. They also plan to have summer courses and internships for students from other institutes. As well as custom training courses for government and industry executives.

Consulting to the government and the critical infrastructure sector by the faculty and researchers at the Center. They will also be one of the focus areas. One of the major components of the centre will be an Industrial Systems Cyber Security Test Bed – a first of its kind in India – similar to the test beds at the Idaho National Labs, Sandia National Labs, and National Institute of Standards and Technology in the U.S.

It will take about a year to build this facility where research on cyber vulnerabilities of critical industrial systems will be carried out along with the development of technology to protect them.

“We recognized the need for developing a research and education program in cybersecurity. Especially in the sector of critical infrastructures. Such as power grid, manufacturing automation, electricity generation facilities, building automation, railway signalling etc. And went to DST with a compelling proposal to establish a national testbed for experimenting with cybersecurity of such systems. And carry out research to develop defence techniques. Through many rounds of presentations, and revisions we were able to convince multiple panels of experts and external reviewers that we have the interdisciplinary expertise at IIT Kanpur. Our centre has experts in cybersecurity, cryptography, machine learning, formal methods, program analysis, electrical engineering, networking and computer systems. A convergence of which is essential to building cybersecurity of critical infrastructure. We are very confident that we can build a world-class facility and research/education/training program,” said Prof. Sandeep Shukla, Co‐Principal Investigator for the centre.

IIT Kanpur Director Dr Indranil Manna says, “Cybersecurity is a major thrust area in this institute considering contemporary national need. And an opportunity for technological innovation where IITK can make a significant impact.”

IIT Kanpur has taken a number of initiatives in the field of cybersecurity research. They recently signed a MoU with New York University Tandon School of Engineering. IIT Kanpur also hosted the Cyber Security Awareness Week in November 2016 with them. They also signed a MoU with the Interdisciplinary Center for Cyber Security at Tel Aviv University in Israel. And signed MoU with Bombay Stock Exchange to cooperate on cybersecurity.

In October 2016, from different Indian banks compromised as many as 32 lakh credit cards, according to National Payments Corporation of India. There were a number of cybersecurity attacks post demonetization, according to TAC Security, a cyber-security solutions provider. In 2016 and early 2017, cyber-attacks disabled the power delivery to a large number of customers in Ukraine. Denial of service attacked Turkey’s banking infrastructure bringing all banking activities to a halt last year. Bangladesh Central Bank lost the equivalent of 80 million dollars through cyber-attacks.